Here is King Robert Bruce and the Spider Story with Moral Lesson in English Written for the Students of different Classes. Students can write the same story under the title, Try, Try Again Story, Robert Bruce and the spider story in English,  God Helps Those Who Help Themselves. The story has been taken from English Grammar & Composition Part-1 by Azeem Publishers. Students of Class 9, Class 11, 1st Year of Icom, FA and FSc can prepare this story as a part of their English course. King Bruce and the Spider Short Story with Moral is not only a motivational story but also a very good bedtime story for little kids. You can get more Moral Stories here. 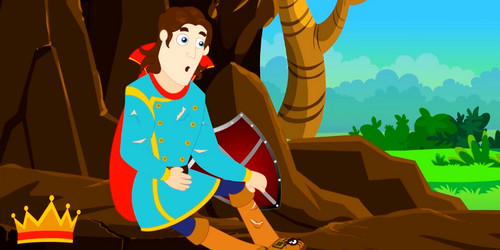 King Bruce of Scotland, after being defeated by the English, was lying in despair in a cave. He wanted to free his country from the English. He had fought many battles but was defeated. He gave up the idea of fighting the English. He fell in a state of gloom. While lying in the cave, he saw a spider on the wall climbing to its home. The spider climbed a little but feels down. The spider made nine attempts, but it could not succeed in his mission. This made Bruce all the more disheartened and he left his idea of fighting the English. As he was thinking, he again saw the spider making another attempt. This time the spider was successful in reaching its home. This successful attempt of the spider game a ray of hope to the king. He girded up his loins, attacked the enemy and defeated him. Thus, he won the war at last and liberated his country from the English.